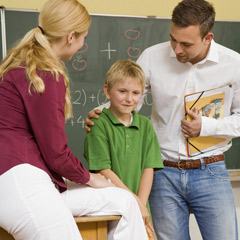 “I am not trying to defend what my child did, BUT . . .” or “I know what my child did was wrong, BUT. . .”  As a school administrator, I have heard these words all too many times.   Few parents like to think that their child has a behavior problem, but parents who excuse misbehavior risk stunting character development.     An important part of character development is learning to take full responsibility for mistakes, accidents, errors, and especially wrongdoing.
Unfortunately, children do not need help excusing bad behavior. They are adept at either explaining it away (“My fist slipped and I accidently hit him”) or generously sharing blame with others (“He hit me first”).  Parents who also make excuses are subtly teaching their children that such behavior is not really so bad, and that they can get away with it regardless of their own culpability.
There are several reasons why some parents excuse their children so quickly and easily.   Some parents who believe their children are unfairly accused may be overly protective, resulting in blind defensiveness.  Other parents cannot accept that alleged misbehavior is really all that bad, failing to understand that perfect children are few and far between.   Still other parents are simply unwilling or unable to face their child’s problems.  Often they observe the same problems at home and feel helpless to deal with them. They find it easier to deny or excuse misbehavior than to address it head on. Parental excuses for misbehavior usually fall into three categories:

“If such and such had not happened, my child would not have misbehaved.”   Other versions include “My child is rowdy because he’s not been feeling well,”  “He is disruptive because he is bored,”  “If the notes had been sent home on time, she would not have cheated,” and “She hit Sam because they were sitting too close.”  While circumstances may sometimes contribute to misbehavior, they are not themselves the cause of it.   At some point, children must learn they are responsible for their actions regardless of the circumstances surrounding them.

“I know my child did wrong, but what are you going to do about that other child?”   A common ploy of those who wish to excuse their child’s behavior is to point out what was wrong about another child’s behavior.  They do this for two reasons:  1) to minimize their own child’s blame, and 2) to satisfy some notion of justice.   While it is important for children to see discipline as fair and impartial, fairness is not nearly as important as taking full responsibility for one’s own actions, regardless of what punishment befalls another. The thought that someone else is not getting what they deserve too easily distracts from the full weight of one’s own guilt.  A child who is focused on “fairness” will not be willing to face his or her own responsibility.   Likewise, parents who are preoccupied with fairness are stealing from their children even more valuable lessons about personal accountability.

“My child has ADD (Attention Deficit Disorder).”   When a parent announces this to me, I know to brace myself for two things:  1) the child will likely have behavior issues, and 2) the parents have already begun the process of excusing them.  Now, I have no doubt that a real, organic condition known as ADD exists.  However, the label is often bandied about apart from a professional diagnosis or without adequate exploration of its causes.   ADD is a label for a particular set of symptoms, such as “does not pay attention” and “does not sit still.”  It is a description of, but not an excuse for, behavior problems. Even professionals are coming to realize that ADD is often an unhelpful and overly diagnosed label.  ADD cannot and should not be made to imply that morally wrong behavior is acceptable, that such children are incapable of doing right, that there might not be additional reasons for misbehavior, and that normal, consistent discipline is inappropriate.
Most parents work very hard to teach children right from wrong, but sometimes they undermine their own efforts by making excuses for them.  Parents who excuse misbehavior are not teaching their children to take responsibility for their actions. Children who do not take responsibility for their actions will not adequately recognize bad behavior or have incentive to change.  Parents will do better for their children if they help them identify and take responsibility for the full measure of their own wrongdoing—without making excuses.


Post-Publication Note:  Fairness and justice is a crucial issue for parents to teach their children.  Unfair discipline can cause bitterness and hopelessness within a child, so I believe that parents should fight for fairness in discipline in schools.  However, my experience has led me to believe that "fairness" can very frequently be used to deny or distract from the culpability that a child bears for his or her own behavior.  A best case scenario would would include encouraging  children to take full responsibility for their own behavior while fighting for fairness in school discipline.
Posted by ReformingWV at 1:10 PM

Email ThisBlogThis!Share to TwitterShare to FacebookShare to Pinterest
Labels: Education