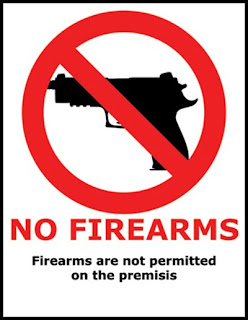 So, I went to Magic Mart (our local poor mans' Walmart) the other day and noticed a sign displayed prominently at the entrance. It said, "Absolutely No Firearms Permitted on this Property."
I assume that this was aimed at law-abiding citizens with legally acquired guns and concealed carry permits, such as myself. It certainly wasn't aimed at thieves and murderers, was it?
After all, if they saw such a sign, they would stop in their tracks and say to themselves, "Aw shucks! And I wanted to rob this store at gunpoint. I guess I will have to do it with a stick or something. Gimme a second while I go put my gun back in my car."
I think a more effective sign should read, "Absolutely No Thieves or Murderers Permitted on this Property." That of course would prevent them from entering the store with their murdering or thieving intent while at the same time allowing law-abiding citizens to retain their constitutional rights.
No wait. I am sorry. That is just stupid. Murderers and thieves will do what they want regardless of what signs are out front. It is only law-abiding citizens, who have no intent to murder to rob, who will begrudgingly comply with Magic Mart's silly prohibition. So then, does Magic Mart's sign accomplish anything whatsoever of value?
Posted by ReformingWV at 1:57 AM