West Virginians Have Been Told it is Raining 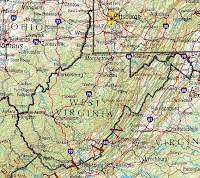 The Great State of West Virginia remains at or near the top of nearly every bad list and at the bottom of every good list of social, economic, educational, and health statistics. For example--

And yet, West Virginians have overwhelmingly re-elected the same ideology to political office for decades on the national and state level. Speaking of lists, is there one for the greatest percentage of people who have been repeatedly bamboozled, and are happy about it? What do we get for our blind allegiance? Do we really prefer the crumbs of federally-funded bridges, roads, buildings, and programs over real and radical improvement to the state of the State? Honestly, I don't care who they are or what party they are from, can we get someone--anyone--who can do something--anything--to actually make a difference within, oh let's say 50 years or so? Fifty years should be enough time to make a difference. Right?