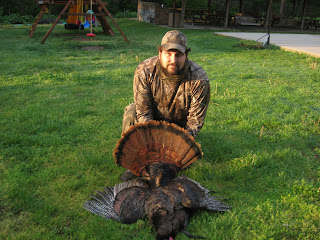 Spring Turkey Season opened in West Virginia on April 25, 2011.  The first morning, I got to my spot before dawn and called in a couple of gobblers within the first hour.  The first stayed out of range.  The second saw me raise my shotgun and then took off.   I did not leave empty handed, however, as I stumbled upon a handful of mollymoochers on my way out of the woods.
The second morning, Tuesday morning, I was making my way to my spot just as the sun was coming up, when I heard a gobbler ahead of me and over the ridge near the spot to which I was heading.  I stopped short of the ridge and headed around the ridge instead of over.  Before I broke around the ridge I heard him gobble loudly, revealing that he was heading my way.  He must have heard me climbing through the woods, because there was no need to call.  They do not mind noise as long as they imagine that it might be another turkey.
I froze when I heard him again.  Dropped my gear and stood with gun to the ground.  When he came around the ridge in front of me, I waited for him to pass behind a tree, and then aimed at where he would reappear on the other side of the tree.  He poked his head out about 40 yards ahead of me.  Standing frozen on a steep hillside with a heavy shotgun aimed  at a fixed point is not easy, but is essential due to turkeys' immediate reaction to any movement whatsoever.  I waited for him to clear the tree and then fired.
He rolled down the hillside, flapping violently, in a way that made me wonder if I would lose him.  West Virginia hillsides are very steep, and he could easily keep rolling toward the bottom if nothing stopped him.  I grabbed my gear, put my gun on safety and then ran downhill as fast as I possible could.  Had anyone seen me, I am sure they would never have imagined that I could have moved so quickly or easily through rough terrain.  I am sure it was a combination of both the adrenalin and my imagination that made my feat possible.  I caught up with him about 50 yards down the hillside.
He weighed well over 20 pounds and is now situated neatly in my freezer.    Eager to do it all again. 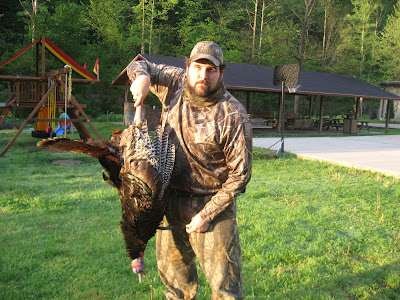 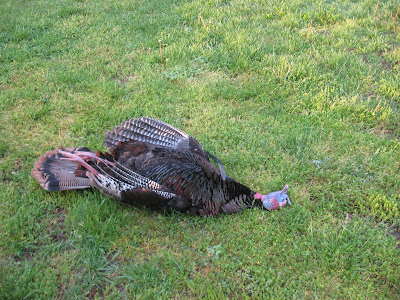 Posted by ReformingWV at 9:10 PM